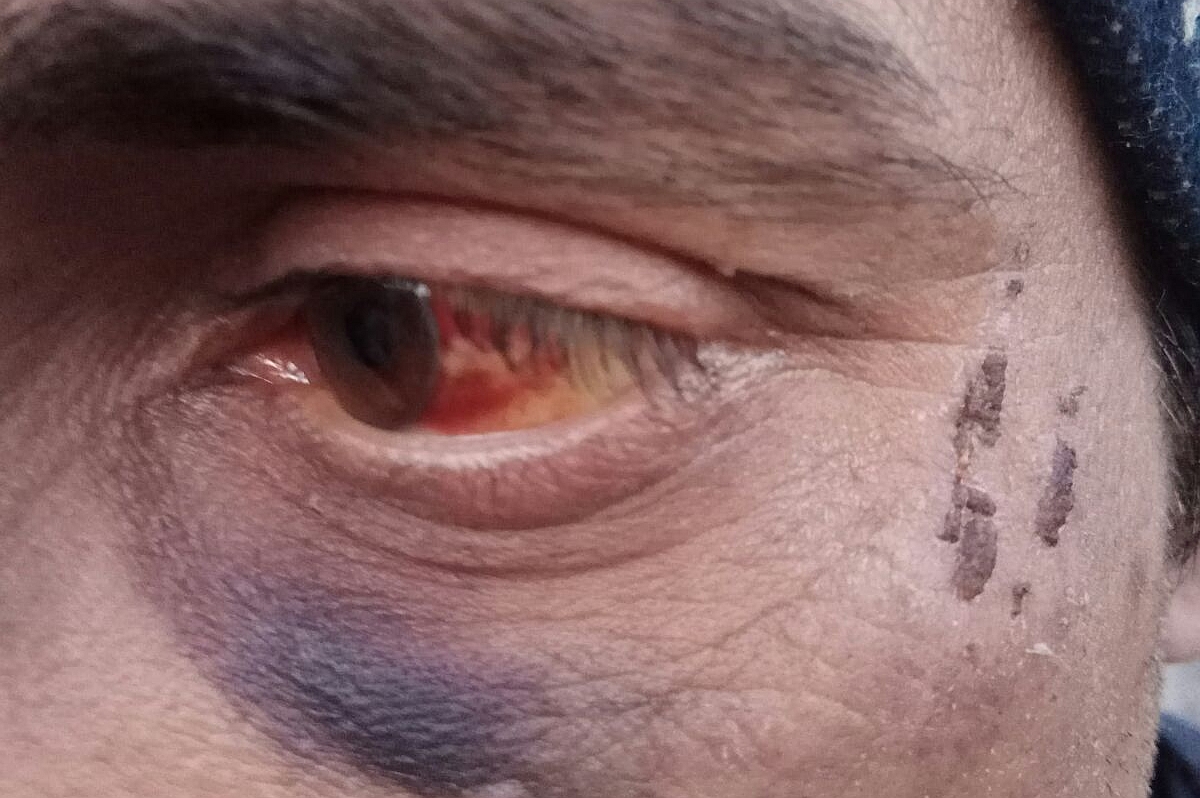 I crossed the Hungarian border with forty other people. I don’t remember the name of the place; I don’t remember the date. Behind the border fence we started walking very fast for about five minutes. Then eleven others and I sat down, while the remaining twenty-eight walked ahead. Between twelve and fourteen police officers arrived; some in a car, some by walking. They had torches and were looking for us. We stood up and they came to us, started kicking us and hitting us on the ribs with police batons. I don’t know what the batons were made of but they were black, heavy and very hard.

Then the police made us walk away from the dry ground we were sitting on before. They forced us to sit in a big puddle of water, about two inches deep. They told us to put our hands up in the air and came running to us, hitting us on our heads with batons. They made us take off our hats and gloves. When my hands got cold I tried to put them in my pockets but they didn’t let me. They were shouting: Take your hands out! and made me unzip my jacket. They emptied our pockets and destroyed our phones by smashing them on the ground with their heels.

Then the police started hitting us with batons again. They hit me twice in the back, twice in the head and on my fingers. There were other policemen I didn’t get to see.

We were still sitting down in the water when they came behind each of us saying: Hello my friend. When we turned to look at them, we were sprayed in the eyes.

Then one of them, a fat man with a beard and moustache, let the dogs loose on us. He was always with a dog between his legs. The dogs were climbing and clawing on us.

When they sprayed me my head went down. Every time I tried to look at them they would hit me in the head. They made us look down like this [lowers his head]. They said we must stay like this. They said: Don’t look up! They were hitting us very hard. They made us sit in water for about one and a half hours.

Afterwards they put us in the police van — a regular marked one with sirens on top. There was a small area separated with a net and they made us get in there. On the other side of the net they had dogs. They use batons to force us in as there was not enough space for all. One of us stood outside, he couldn’t get in on his own but they forced him inside by pushing and hitting. Then they closed the door and drove us to the border gate.

When we got out they made us stand in a line again. A new man arrived and started spraying us, he was wearing a different type of uniform, with something black and white on it. It was like an army uniform. The rest of them had dark blue uniforms. This spray was different than the first one. It made my eyes hurt. The first one they had used made me cough and want to vomit. I was coughing a lot. I was in the front of the line when they started spraying us.

They asked why we tried to cross the border. They made a video of me. I was told to read aloud a statement that was on a hook on the border gate while they were filming me. After I finished reading, one of the policemen pushed me to the other side. When we all had read the statement they opened the gate and said: Go! We walked back and arrived at the gas station around 21:30.